The Region of Valencia has a total area of 23,255 km2 and a profoundly Mediterranean landscape with vast coastal plains alternating with striking mountainous areas, in addition to 632 km of coastline so visitors can enjoy the sea and the good climate all year round. It has a population of over 5,000,000 inhabitants, and boasts an age-old culture which includes the celebration of numerous popular fiestas in all its towns and villages; there are major tourist resorts along its coastline, and it has several large cities - foremost of which is Valencia - with a full range of services, as well as sleepy villages in the interior. From north to south, the Region of Valencia comprises the provinces of Castellon, Valencia and Alicante. 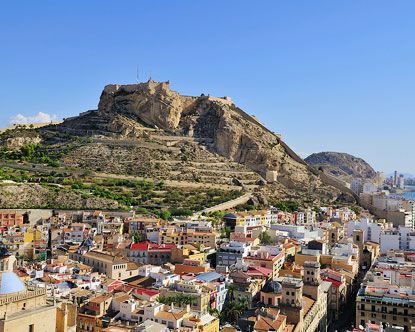 Alicante city has a population of over 300,000 and combines both classic and modern societies, living in harmony. It offers business and pleasure, entertainment and education. The history of Alicante goes back to prehistoric times with remains being found here from the third century before Christ. Today, Alicante is a first rate tourist centre thanks to its splendid beaches, excellent climate and well known facilities. Alicante is one of the most visited cities on the Costa Blanca.

The Old City is relatively small and is situated between the Rambla, a boulevard that is the site of the former city wall, and the hill on which Santa Barbara Castle is located. Most monuments are located in the Old City.

The old district of Santa Cruz is a series of narrow streets with steps, which is built on the slopes of Monte Benacantil. The picturesque streets are surrounded by white houses with lush flowers and decorated tiles.

The Santa Barbara Castle (Castillo de Santa Barbara) is a complex of buildings and defensive walls on a 166 meter high hill, the Monte Benacantil, which towers high above the city. This site was already used in prehistoric times. It has relics found from the Bronze Age, the Kelto-Iberian culture and Roman times. The fortress was built by the Moors, ending 9th century. The oldest parts of the castle date from the 11th to 13th centuries.
The newer neighborhoods Centro Mercado, and San Anton have some beautiful boulevards (Avenidas) along the coast. Palm-lined, park-like pedestrian areas stretch along the coast overlooking the marina.

There are several museums In the city.

Elx (Elche) is 23 km from Alicante and is the fourth largest city of the autonomous community of Valencia.
In Elche on 14 and 15 August each year the Elche Mystery Play (Misteri d'Elx) is staged, a production about the last days of life, the rise to heaven and the coronation of the Virgin Mary, called La Festa. This Valencian city has managed to retain its original form the mystery game and is today the only medieval game in that form.
Photo Impression

The Palmeral or Palm Grove of Elche (Spanish: Palmeral de Elche) is the generic name used to designate a system of date palm orchards in the city of Elche. Currently, in the urban area of Elche there are a total of 97 different orchards containing about 70,000 date palms, mostly in the east bank of the Vinalopo. This number does not include other large plantations located around the city proper. All together, the number may be close to 200,000 palms. The Palm Grove covers over 3.5 km2, including 1.5 km2 within the city of Elche. It is the only palm grove of its type anywhere in Europe and one of the largest in the world. Photo Impression

Cartagena is a charming, compact, coastal city that became great during the Roman times when Hannibal set off from it with his elephants on his journey to Rome. There are so many things to see, with over 12 museums, 10 buildings of interest, 4 noteworthy churches and a whole host of monuments not to mention the archaeological sites. You can take the very informative Tourist Bus or perhaps sail out to sea on the Tourist Boat. You can explore the narrow characterful streets of the old town or relax at one of the bars, cafes and restaurants on the waterfront.

For over a thousand years in the neighborhood of the city of Cartagena Licor 43 is made, which in Spanish is called Cuarenta Y Tres or Licor Cuarenta Y Tres, a sweet Spanish liqueur with a strong Vanilla flavor.
You can visit the factory and taste the Licor 43 with the Licor 43 experience.
Further information can be found here.

The Costa Blanca enjoys a warm and dry Mediterranean climate, with little rain and a large number of hours of sun per year - just under 3,000 hours. The region has bee described by the World Health Organisation as being one of the healthiest climates in the world.