Points of interest in the Alicante region

The inland of the Costa Blanca.

The inland areas of the Costa Blanca to the south east of the country are covered by the provinces of Valencia and Murcia. This region is mountainous and the landscape is stunning with large areas of fruit and almond trees. There is a good selection of markets every day of the week where the locals would buy their fresh fruit and vegetables. The cultures of this region go back many hundreds of years and this is very apparent when visiting Orihuela which is the old capital of Valencia. Narrow side streets, churches and a host of fiestas ensure you are never bored with Spanish life. Most towns would have their own fiestas and it is well worth participating with the locals.

Tabarca is the only inhabited island in the Region of Valencia and is located opposite the city of Alicante, 11 nautical miles offshore and near the Santa Pola headland. It is approximately 1,800 metres long and measures some 400 metres across at its widest point.
A visit to the island usually lasts one day. There are numerous departure times from the port of Alicante, although the regularity of these depends upon the time of year. The boat ride is comfortable and lasts for around one hour. The island can also be reached from Santa Pola and Benidorm. Once on the island, visitors can enjoy the coves and beaches with their crystal-clear waters and a picturesque fishing port with excellent eateries offering the opportunity to try the traditional 'caldero', the island's typical dish.

Benidorm Island is an islet located on the Spanish coast, off the holiday city of Benidorm. It is approximately 3.5 km from Benidorm promenade. Tourists to the area can take boat trips from the mainland to the island to visit the island's wildlife, notably its peacock population. Due to this it is colloquially known as Peacock Island. Benidorm Island is a nature reserve.

The Santa Pola Salinas (saltworks) nature reserve is 2,470 hectares in size, comprising two working salt factories and an expanse of protected area. The site lies to the Southwest of the town of Santa Pola. This area along with El Hondo used to form a large wetland which was known as the Albufera de Elche, and is known to birders as part of the wider area called the Cabo de Santa Pola. To the south of the Salinas is a separate reserve called El Pinet which preserves an area of the Salinas in its original state.

About 20 km northwest of Alicante you can find the Cuevas del Canelobre, the caves of Busot. Caves with stalagmites and stalactites and a large, high Hall (70 m), called the Cathedral.

The waterfalls of Algar.

On 3 km. from Callosa d en Sarria, near Benidorm, you can find these waterfalls, ending up in coves. You can spend a day with the kids, enjoy a swim in the refreshing water at the waterfalls, or just enjoy the beautiful scenery. There are also a number of restaurants

Terra Natura lies in another vast area of mountainside next to its better known neighbour, Terra Mitica. Although the theme park has over 700 metres of water slides it is essentially an animal park divided according to continent. Each continent sector is home to the animals, people and vegetation native to it.
For many parents the water park is a highlight of the day as you can escape the temperatures you've experienced in the safari park area as you settle down on a sunbed in the water park after lunch. Located next to an enormous lake sized swimming pool, the water slides and the children's play area this a great spot to relax where you can still keep an eye on the kids. 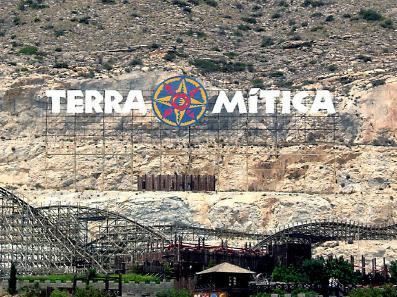 Terra Mitica is one of Europe's most exciting theme parks and is Benidorm's main tourist attraction. It has something for all age groups and for all 'fear thresholds'. Don't worry about going if you're not a fan of the adrenaline rush as there are always plenty gentler options including some great water rides. To make sure that younger children never feel left out the park has cleverly constructed 15 kiddie rides which are replicas of the scarier adult version.

Rio Safari Elche makes for a fantastic fun day out for the whole family. As its name suggests it is located in Elche on the road connecting Elche and Santa Pola. With numerous different species of animals from all around the world, sheltered here, you are bound to see your favourite animal.

The museum offers an interesting historic journey through rooms dedicated to Prehistory, Iberian Culture, Roman Culture and Middle Ages.
They contain pieces from some 100,000 years ago, Iberian ceramics, a recreation of Roman daily life and over 300 objects from the Middle Ages. The museum also offers information on the archaeological sites of Lucentum, Petrarcos and Illeta.

Lucentum is the name of the Roman predecessor of the city of Alicante, Spain. Particularly, it refers to the archaeological site in which the remains of this ancient settlement lie, at a place known as El Tossal de Manises, in the neighborhood of Albufereta

This museum occupies the 18th century Gravina Palace, which once belonged to the Count of Lumiares and housed the Provincial Archives. It exhibits works owned by the Provincial Council of Alicante, with collections comprising works of art created in Alicante from the Middle Ages through to the early 20th century.